The moment I became a pilgrim 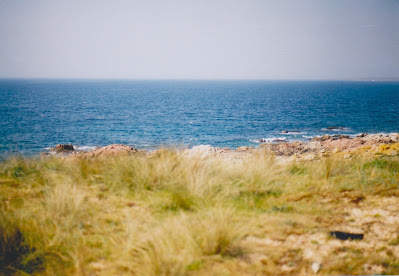 (A long overdue letter of thanks to the lady with water and sandwiches in Galicia...)

Since I met you back in the early spring of 1995, I have met many trail angels, but you were my first. It was you who made me a pilgrim, possibly you who fueled this obsession, to walk long walks in sacred space and time. I have thanked you many times in my heart. I am pretty certain you have long forgotten what you did. Isn’t it remarkable how one seemingly little act can alter a whole life?

That spring was nine years after I first heard about the Camino de Santiago. In 1986, those three words lodged into me and I knew that one day, when I could, I would walk it. But despite the long years, you would think that I had a plan for it. Instead, when the moment arrived, I was utterly unprepared. In fact, I hadn’t planned to walk it just then.

I was coming up from southwestern Spain where I had just finished doctoral research for my dissertation. My husband, Miles, met me midway in Lisbon and we took the train north through Portugal and into Galicia, destined for Santiago de Compostela. I figured I had a few days to see the glorious city of legend and myth and then one day, a year or two later if providence allowed, I would return with more time to walk the whole trail from Saint-Jean-Pied-de-Port.

But just before reaching the train’s terminus in Santiago, we heard the train conductor announce, “last stop, Padrón.”

Miles and I looked at each other and knew it had to start here. Just as the train was beginning to pull out of Padrón, we grabbed out packs and jumped. I heard an explosive, “¡Coños!” erupt from behind us, accompanied by the well-justified arm pumping of the conductor. But we landed well, knocked the dust off of the hems of our pants, and after visiting the town where Saint James’ stone boat purportedly moored nearly two thousand years, we began walking. 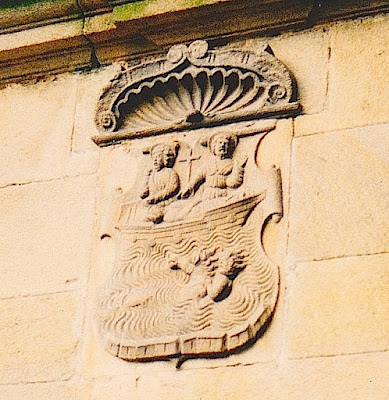 We had no map, no food, and no water. My thesis, all 500-pages of it, was strapped to the hood of my pack. We took the scenic route, a roundabout detour to walk along the coastal finger of land between Padrón and Noya. Only when we were out in the middle of nowhere did we realize what royal idiots we were. We entered a natural protected park, a rare place in Spain where there are no cafés.

“Don’t worry,” Miles said, “This here is a pilgrimage. Let’s trust the path to give us what we need when we need it.” With that sketchy plan, we pressed on.

Three hours later, seeing no one and no café, feeling an increasingly dry texture in my throat, I began to doubt Miles’ optimistic approach. But it was right then that you appeared, driving past us and serendipitously stopping you car on the roadside to check on something. I rushed over to you to ask you where we could find water and food.

“You’re in the middle of a protected natural park,” you’d answered, “so not very near here, except…” You smiled and opened your trunk, rooted through several bags, and then pulled out a large unopened bottle of mineral water and two sandwiches. You told us to take them, that you had just come from your grocery shopping, and, thinking of going for a hike later in the day, had on a whim picked up the water and bocadillos. You insisted and refused any payment. “This is pilgrimage,” you’d said and drove off.

Those three words reverberated in my mind and rewove my body and being. Christening us pilgrims, out there on that wild finger of land in the middle of nowhere, was a game changer for me. It was the very moment I turned into a lifelong pilgrim.

Your one act also seemed to have opened a magical door, one flowing with serendipity and synchronicity. The rest of the day, people showed up right as we needed guidance, sustenance, and support. By night, coastal villagers gave us a place to sleep and shared their dinner, just-caught fish and just-plucked vegetables from their gardens, along with homemade sparkling white wine.

Thanks to you, I became a pilgrim. Thanks to you and your many brother and sister Camino angels since, I have remained a pilgrim, and I continue to learn from you about grace, magic, generosity, and kindness with each step of the Way.

My friends Mel and Sue say that everyone has a dune story to tell when they come to this stunning southwestern French Atlantic outpost near Bordeaux.

When I hiked the Dune du Pilat, my dune story was the thrill of climbing to the ridge of the immense dune and having the constant bird's eye view of forest and ocean on either side. It was as if walking on the spine of a giant slumbering beast: I could also see the Arcachon Basin, an amazing estuary rich with diverse bird and sea life. I could just make out the waves at Cap Ferret, a narrow finger of land that almost closes the basin off from the ocean. And on my way up, I met a smart young Bavarian woman who was an agriculture student and spoke passionately about (re)creating a world where we grow good food locally and with sustainable practices. I hiked and learned and saw the potential of that world all around me. 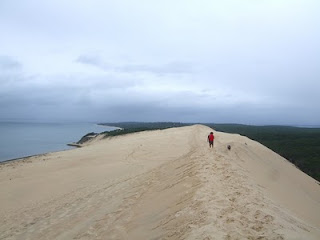 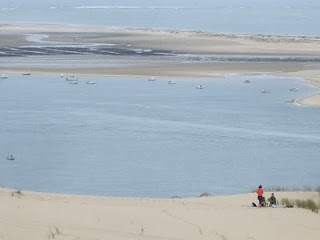 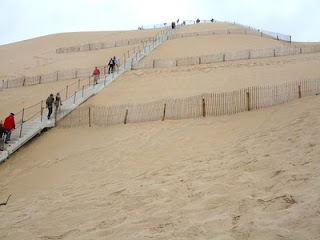 When I descended from the spine after trekking the 6-kilometers long trail, I discovered a little open-air dune-side restaurant serving simply prepared, just-foraged mussels, perhaps the best I've ever eaten. The mussels came from just over the rise in the Arcachon Basin, and the chef was happy to share her recipe, noted below.

Arcachon and the Dune du Pilat are an easy day-trip from Bordeaux: Take the train from Bordeaux’s St-Jean station to the town of Arcachon where right in front of the train station is a bus going to the dune. 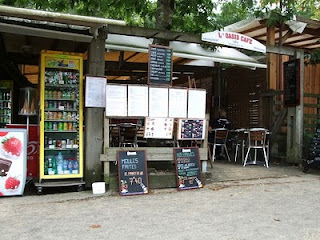 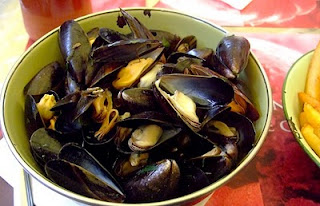 Sautee the onions in the olive oil in a large pot. Add the mussels, white wine, tarragon, and salt and pepper. Cover and bring the pot to a boil and then lower the heat to steam the mussels until they open. Once they open, take the mussels off the heat and discard any that did not open.

Enjoy the mussels with a glass of dry white wine (ideally, the same one you cooked with) and crusty bread or french fries. 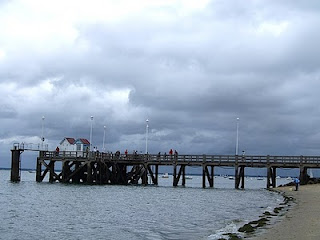 Posted by The Pilgrim's Way Cafe - A Travel and Food Blog at 2:09 AM 1 comments 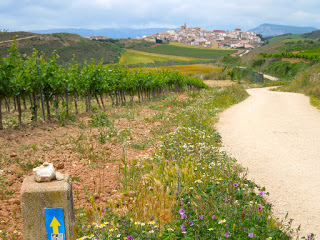 
Nothing connects me more deeply to wine than walking eight hours a day through vineyard after vineyard across southern France and northern Spain on the Camino de Santiago, that thousand year old pilgrimage route to Saint James the Greater’s supposed tomb in Santiago de Compostela. Life unfolds at the pace of photosynthesis and footfall. At night the two fuse over a glass from the land and with the locals I met that day. (I've been walking this road, on different routes, since 1995 and it keeps calling me back. My most recent trek was this spring. There is always more to learn!) 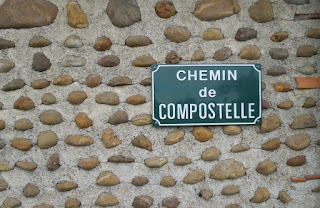 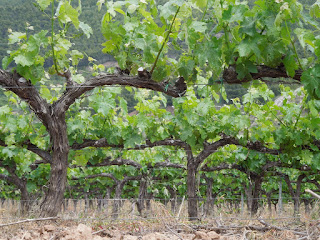 In Gascony, heavy clusters of golden Petit Manseng hanging on a fence high upon a hill overhead dazzled me as the sun backlit them in late morning light like luminous angels descending from heaven. At night, I found a bottle of Jurançon from the vineyard and shared it with fellow pilgrims: It tasted like the day, a liquid journal, right down to the sweep of wind through sorghum and sunflowers and the distant moo from the caramel-cream spotted cow.

In Navarra, I took in a local glass at the old wine monastery of Irache’s fountain with two spigots, one for water and one for wine, a tradition carried on by Bodegas Irache to honor pilgrims and recall Jesus’ first miracle. Like Jesus’ wine, theirs was pretty good. 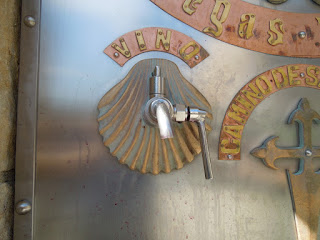 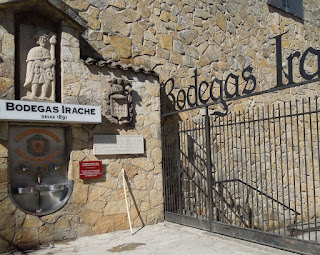 In Leon, I joined the harvest and stomped Tempranillo with acquaintances in an old bathtub in their garage. We barreled and stored the future wine then uncorked prior years’ vintages and feasted all night on backyard grilled paprika chicken, potatoes, and salads plucked from the garden. 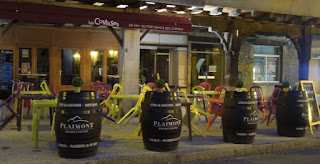 In Galicia, at Santiago at last, two brother chefs at Café Iacobus celebrated my finish with a gift, grilled sea scallops and a glass of small-production Albariño, both procured from the same coastal spot. 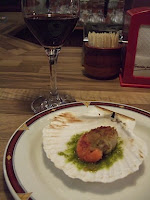 How can one separate the Camino from wine when this intimately bound together?

The Camino’s making was directly connected to winemaking. With their medieval building campaigns to support the pilgrimage, celibate foodie monks also revived the interrupted ancient wine craft brought to southern France and northern Spain by Phoenicians, Greeks, and Romans millennia before. On the church stones they engraved copious wine scenes, from wine miracles (water to wine, wine to blood) to the vine representing Jesus who sustains it all. 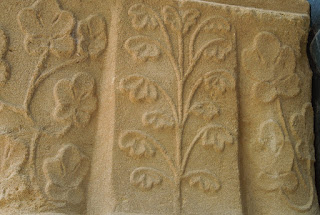 When around AD 1139 the monk Aimery Picaud wrote Europe’s first travel guide, The Pilgrims’ Guide to St James of Compostela, he praised the wines of Bordeaux, Estella in Navarra, and Carrion de los Condes in Castile. In Galicia, so close to Santiago, he bemoaned wine’s scarcity but in the same pen-stroke praised the cider.

If Picaud and the other monks had wine as much as salvation on their minds, I feel fine following in their footsteps. The Camino will work this magic anyhow, weaving the walker into the sacredness of the land and people, with wine as its conduit. 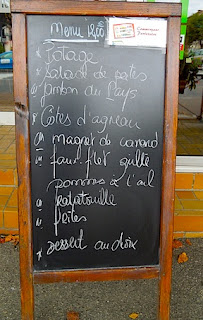 Rias Baixas
Albariño and grilled sea scallops and chives
Posted by The Pilgrim's Way Cafe - A Travel and Food Blog at 7:24 AM 2 comments 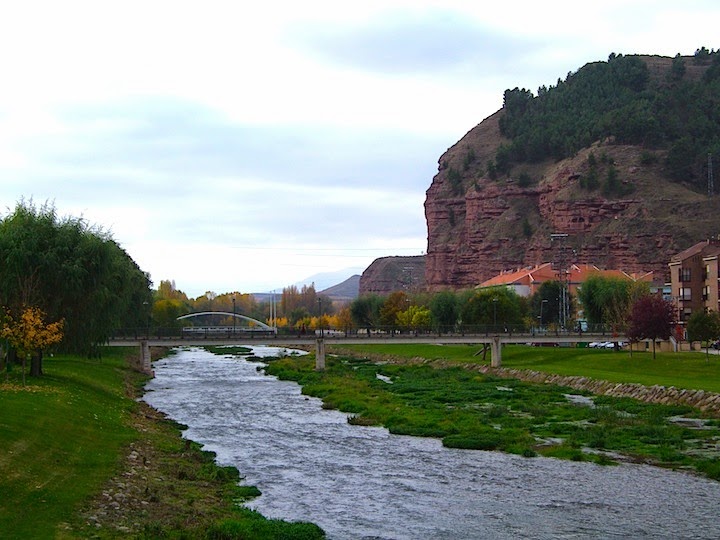 The monastery, Monasterio de Santa María la Real, is built right into the cliff. Upon entering you pass through the cloister with its delicate Gothic-arched latticework and then deeper in you reach the church. 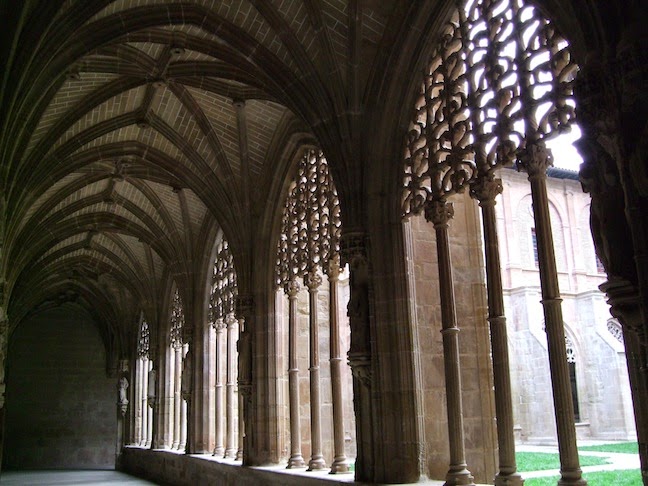 In the very back is the cave, discovered in AD 1044 when the king of Navarra, García III, followed his hunting falcon, who was pursuing a partridge. Behind the thicket hiding the cave he spied a mysterious light and discovered Our Lady of Nájera surrounded by white lilies and the two birds, now good friends rather than predator and prey. 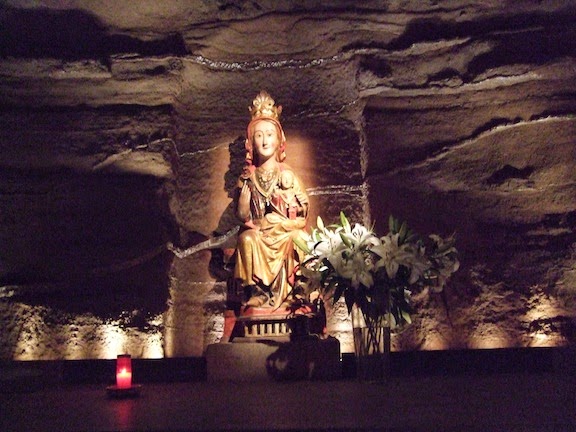 You can visit the red sandstone cave, most likely carved out of the soft stone around the 3rd century. It was then forgotten, overgrown by forest and hidden, until that mystical day in the 11th century.

More on Nájera's folklore.
Posted by The Pilgrim's Way Cafe - A Travel and Food Blog at 10:10 AM 0 comments